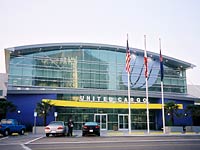 Los Angeles International Airport (LAX) is the eleventh busiest cargo airport in the world, handling more than 2 million tons of origination and destination air cargo in 2006.

LAX is the major international cargo airport serving Southern California - the world’s eleventh largest economy. Asia-Pacific is Los Angeles' top regional trading partner with 582,283 tons annually valued at $45.2 billion. Europe is second with 166,190 tons valued at $13.7 billion annually.
Diverse Cargo
The products that are exported and imported through Los Angeles are as varied as the number of airlines and nations served. More than 1,000 flights depart and arrive every day carrying cargo. More than half of the air cargo at LAX arrives and departs in the bellies of passenger aircraft. This allows airlines serving LAX to offer some of the lowest airfares to travelers.

More than 50 percent of LAX air cargo activity is international in origin or destination. An estimated 79 percent of the region's air cargo is handled through LAX.

Shippers will find the most broadly based selection of airlines of any U.S. airport. Every major international air carrier serving the Pacific calls at Los Angeles, while European and Latin American air carriers fully serve LAX as well.

The most exported air commodity in terms of tonnage from LAX is vegetables, fruit and nuts with 15.1 percent of the total weight. Other leading exports are base metals and articles thereof; computer equipment; photo, science and medical instruments; paper and pulp products; chemical products; plastics and articles thereof; prepared foodstuffs; special classification provisions; and aircraft products.

China leads all nations in importing through LAX. Other Pacific Rim nations such as Japan, South Korea, Taiwan, Philippines, Malaysia, and Thailand find LAX a prime port of entry. The other nations in the top 10 are Australia, Germany, and Indonesia.
Extensive Airfield Cargo Network
The ever-growing number of air carriers, presently 88 passenger and all-cargo airlines, and their worldwide service area have created an extensive air cargo handling network at LAX. The airport has 2.1 million square-feet developed for cargo on 194 acres.

Four million square-feet is developed for cargo use in the immediate vicinity of the airport.

Improvements and enhancements by tenants and Los Angeles World Airports have been continually made at Century Cargo Complex, LAX's first air cargo area. American, United, Virgin Atlantic, and Asiana house their freight operations at the Century Boulevard location. Alaska Airlines, British Airways, and Southwest Airlines are located there as well.
Southern California -- The Nation's Top International Trade Center
Los Angeles International Airport is the key transportation center for one of the world's most dynamic economies. The greater Los Angeles region's international trade is valued at $200 billion, with LAX alone responsible for more than $68 billion in exports and imports.

Greater Los Angeles accounts for nearly half of the economy of California and a majority of the state's multi-billion dollars in international trade.

Many of the state's largest industrial companies headquartered in the state are located in the greater Los Angeles area. The area is a leading high-technology center for the nation in entertainment, electronics, biomedical, computers, and aerospace industries.

The convenience and efficiency of LAX as a major distribution center for cargo is supported by the ready availability of vital allied services, especially for Pacific Rim traders: